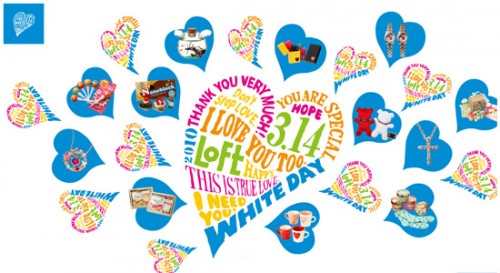 As we mentioned in our previous newsletter, in Japan Valentine’s Day is typically a day

for girls and women to give chocolates to boys and men as an expression of love or social obligation.  In return for Valentine’s Day, there’s a day we call White Day on March 14th, a month after Valentine’s Day.  This is a day for boys and men to give candy to girls and women.   It was started by the National Confectionery Industry Association in 1978, as a marketing campaign for the industry, but now it’s became a tradition for us, especially with the younger generation.   It may sound a little odd, but our culture adopts a lot from others, then adapts them and gives them a new meaning so that they mix thoroughly into our old traditions.  Valentine’s Day is one, and White Day is something which is sort of like a spin-off of Valentine’s Day.

Use Thumb Stimulation to Rejuvenate Your Brain!, by Dr. Yoshiya Hasegawa, has seen a total of 110,000 copies in print two months after its launch. 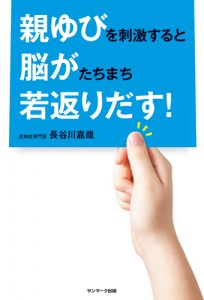 Use Thumb Stimulation to Rejuvenate Your Brain! has been selling well in our domestic

market.  The total print run has reached 110,000 copies, and it’s still selling well.   We’re hoping this title will be our next big hit.   Rights are available in all languages.

Seven Teachings That Could Make A Coward Boy Brave

A Wonderful Adventure That Builds Confidence 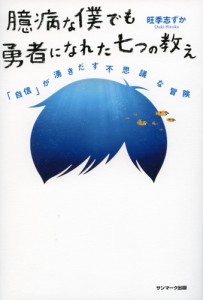 The highly anticipated debut novel from a popular scriptwriter behind a number of hit TV dramas.

This wonderful debut fantasy novel by a popular TV drama scriptwriter, Shizuka Ouki, will thrill you, encourage you, and make you cry.

It’s about a young boy named Kira who was born with blue hair and often called a monster. In his despair, he meets a spirit in the forest who shares a message from the gods. He sets out on an adventure searching for seven stones that grant wishes, and in the process comes across the true source of courage.

It’s a magnificently imagined world that will transform your heart and life.

An excerpt from the novel:

“The first step is the scariest. It takes the same kind of courage to walk a bridge blind. As long as you take steps, a bridge will appear under your feet. Forget about fear and go after your dreams while you are young.”

After the messenger said this, he suddenly vanished.

In search for the legendary tabernacle, the place of the seven stones, Kira began walking toward the top of the rainbow.

A message from the gods

Kira, who gets a hard time for having blue hair, goes on an adventure into the forest with his classmate and star of the baseball team, Riku. There, they meet a frog that relays to them a message from the gods. They then go in search of the ark (the tabernacle) where it is said all wishes are granted. Once timid and cowardly, Kira is given renewed courage and spirit by the adventure. Whenever you feel something is beyond you, and you find it impossible to take that first step, read this story. It will give you the spirit and confidence you need. This is the literary debut of popular TV drama scriptwriter Shizuka Ouki.

Shizuka Ouki is a scriptwriter born in Tokushima Prefecture, Japan. Putting her abundant life experience to good use, she has written for many popular TV dramas. Her work includes Empress, Karamazov Brothers, Strawberry Night, Tokumei Kakarichou Tadano Hitoshi, Seigi No Mikata, Saga No Gabai Bachan, Toilet Gods, and many more. Currently living in Hayama in Kanagawa Prefecture, she enjoys surfing and hula dancing. Seven Teachings That Could Make A Coward Boy Brave: A Wonderful Adventure That Builds Confidence is her first literary release.

Before the Coffee Gets Cold 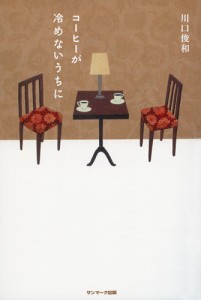 I want to relive those days...
Four heart-warming miracles that occurred at a coffee shop that acts as a time machine.

You’ll be moved to tears more than once!

An urban legend is circulating about a certain seat in a certain town’s coffee shop. If you use that seat, rumor has it you will be transported back to a time of your choice.

But there are some very troublesome rules:
1. You can only meet people who have visited the coffee shop.

2. No matter what you do, you can’t change the present.
3.  A customer will be sitting in your seat in the past. You have to wait until they’ve gone to sit down.

5. Your time in the past starts when your coffee has been poured and ends once the coffee has gone cold. Those aren’t the only rules, but people still feel the need to visit the coffee shop after hearing the rumors. The coffee shop is called Funiculi Funicula. Would you still want to travel to the past under these conditions? This book tells the story of four heart-warming miracles that took place in this coffee shop.

Story 1: Lovers: The woman who left a man who wanted to marry her

Story 2: A Married Couple: A man and a nurse who lost their memories
Story 3: Sisters: A little sister who often eats out with her big sister
Story 4: Mother and Child: A pregnant woman who works at the coffee shop

I was introduced to the stories of Before the Coffee Gets Cold when I was invited to the play by a friend. I cried from beginning to end watching the four-part play. As soon as it ended, I located the playwright and asked him if he’d be interested in turning it into a book. That was four years ago. I’m very happy to finally be able to share this book with the world.

Toshikazu Kawaguchi was born in Osaka, Japan, in 1971. He used to produce, direct and write for the theatrical group Sonic Snail. As a playwright, his most representative works include COUPLE, Sunset Song, and family time. This book is based on Before the Coffee Gets Cold, a 1110 Productions play that won the 10th Suginami Drama Festival grand prize. This is his debut as an author.