Being Hungry Makes You Healthy

One meal a day and you'll look 20 years younger! 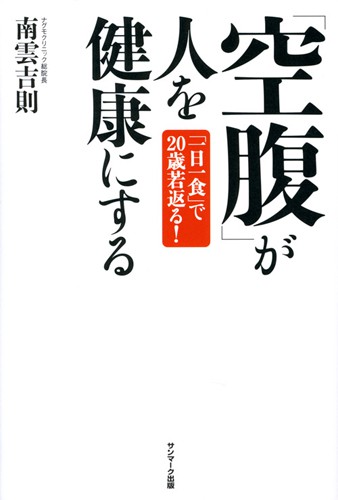 A rumbling stomach is a sign that the cells in your body are at work!

In recent years, a gene referred to as Sirtuin has gained a lot of attention. One condition for the switch on this life-governing gene to be activated is an empty stomach. In other words, the gene doesn’t become active unless you’re hungry for a period of time.
In modern times, however, people eat at meal times even if they aren’t hungry. This is believed to have harmful effects on the body because the human body isn’t designed to thrive in a constant state of satisfaction. Based on information from various medical sources and personal experience, this revolutionary book explains that having one meal a day is the best lifestyle for human beings and suggests that people try it. Just by switching to having one meal a day, ailing parts of your body will be restored, you will revert to your healthy weight, your skin will gradually become younger, and your body will continually benefit in many ways!

– Overeating leads to disease
– Why you still add weight even when you drink water
– Sirtuin, the gene that restores cells
– Why we shiver when it’s cold
– The real reason metabolic syndrome shortens your lifespan
– Why one meal a day won’t lead to malnutrition
– An easy way to reduce the amount of the food you eat
– You shouldn’t drink tea or coffee on an empty stomach
– Go to bed immediately after your meal
– The best time to restore your youth
– Keeping the body too warm makes it sensitive to cold
– Follow your own heart in life
– Would you be okay if your life ended this way?

It’s likely that people who believe that having three meals a day is common knowledge will find the notion of having only one meal a day to be preposterous, but it actually has solid medical grounds. More and more executives are adopting this eating habit. What is appealing about this method is that there are no particular restrictions on what should be eaten in that single meal of the day.
In short, you’re free to eat whatever you would like to eat. As your health improves, you will no longer have any desire to eat unnecessary foods or foods that might harm your body. In other words, you will automatically become healthy and lose unnecessary weight, and your skin will have its youthfulness restored. What could be more exciting than that? After sticking with this meal plan for over 10 years, Dr. Nagumo looks like he’s in his 30s, although he’s actually 56 years old! I’ll also try to embark on a lifestyle of having only one meal a day.

Yoshinori Nagumo was born in 1955, the fourth generation in a family of doctors. He’s the general director of the Nagumo Clinic. His father was Japan’s cosmetic surgery pioneer, Dr. Yoshikazu Nagumo. After graduating from Tokyo Jikei University, Yoshinori Nagumo moved on to the Department of Plastic Surgery at Tokyo Women’s Medical University, where he studied cancer therapy. He then became the chief physician of the first lacteal gland medical office of Jikei Medical University Hospital and eventually began his own practice, Nagumo Clinic, which focuses on breast health.
With the motto “To help women maintain the beauty, health and functionality of their breasts,” he has gone on to establish cancer surgery clinics in Tokyo, Nagoya, Osaka and Fukuoka where he devotes himself to carrying out breast surgery. He is a medical doctor and is a breast specialist.
In 2012, he was appointed honorary president of the International Anti-Aging Medical Society. He is a part-time professor at Jikei Medical University and Kinki University, and a visiting lecturer at Dong-A University in Korea and Dalian Medical University in China. He frequently speaks at seminars held by the Japanese Breast Cancer Society, the Japan Society of Plastic and Reconstructive Surgery, and the Japan Society of Aesthetic Plastic Surgery. He often appears as a regular commentator on popular TV programs. His main publications are How to Look 30 When You’re 50 (Kodansha plus Alpha Shinsho), Drinking Burdock Tea Will Make You 20 Years Younger (Softbank Creative), and A Rustproof Lifestyle (PHP Interface) among others.