As mentioned in the last NEWS Mail, Marie Kondo, the author of The Life-Changing Magic of Tidying Up, visited San Francisco and New York this January and February. She spoke to audiences in both cities, and her speech, through English and Japanese, in front of a full house of local readers and fans was a great success. Articles based on interviews with her during the visit appeared in newspapers such as The New York Times and The Boston Globe. The waves of “Sparking Joy” tidying seem to grow larger and larger.

The excitement of the phenomenal bestseller The Life-Changing Magic of Tidying Up is now spreading into Italy! 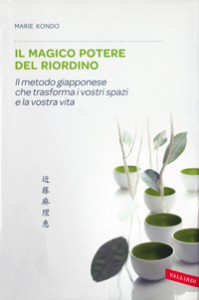 We’ve announced the great response to the worldwide bestseller The Life-Changing Magic of Tidying Up by Marie Kondo many times over in this NEWS Mail, but it’s still growing with no boundaries. Following its success in the U.S., the book is now reaching another milestone–in Italy! Just four months after its release, the Italian version has ranked No. 1 on the bestseller list of Amazon Italy this February. As the French version will be released in France soon, what we expect next is to find the title on the top 10 bestseller lists in three different language communities at the same time: English, Italian, and French.