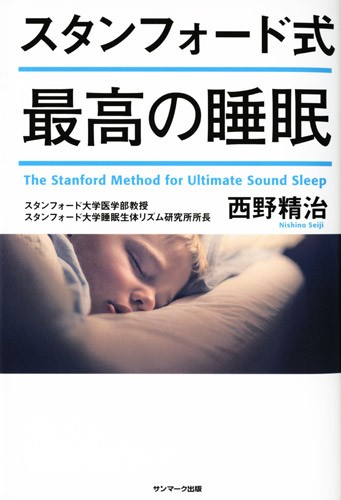 How to achieve “extreme recovery from exhaustion” based on scientific research done by a Japanese professor at Stanford, the “Mecca of sleep research.”

A leading Japanese professor who currently works at Stanford reveals how to get the best sleep possible in his new book.   Stanford, a “sleep research Mecca” which has produced many famous researchers, also has the world’s latest information on sleep. The author, Seiji Nishino, is currently a member of the medical faculty and head of the world’s top sleep research institute there, which consequently makes him an authority on sleep research.   “Sleep is more about ‘quality’ than ‘time.’” After nearly 30 years of research, Professor Nishino reveals in this book the best sleeping methods for achieving “extreme recovery from exhaustion” and a “powerful wake-up.”   This one book will solve all of your sleep-related problems in one fell swoop, including difficulties with falling asleep, waking up early, and staying awake throughout the day.

Author Seiji Nishino is a world-renowned sleep researcher who is currently a medical professor at Stanford University.   I was surprised by many of the facts he shared with me about sleep, but the most surprising to me was: “Even if you sleep as long as you want, curing the effects of sleep deprivation takes three weeks.”   This means that staying in bed for 14 hours repeatedly over three weeks will buy you back about 40 minutes of sleep lost from sleep deprivation. But since we can’t always control how long we can stay in bed, this seems unrealistic. You are probably wondering, “Well, then what is the solution?” That solution is waiting for you in this book.   The book contains a lot of important new knowledge related to sleep, including what kinds of baths to take to promote sound sleep, what kinds of dreams you shouldn’t be having, what to hold when you’re sleepy to eliminate sleepiness, and what drinks help you sleep!

Dr. Seiji Nishino is a professor in the Department of Psychiatry at Stanford University, and the head of the Sleep and Circadian Neurobiology Lab (SCN lab) of the same institution. He was born in Osaka, Japan, in 1955. In 1987, he went from Osaka Medical College to study at the Stanford Center for Sleep Sciences and Medicine at Stanford University. Much of his research focuses on finding the cause for excessive daytime sleepiness brought on by hypersomnia and narcolepsy. After discovering a causative gene for narcolepsy in dogs in 1999, he began group studies with the hope of stopping what causes narcolepsy in humans.   He was made the head of the SCN lab in 2005 and continues to expand the field of sleep research down to the cellular and genetic levels. Desiring to “solve the mystery of sleep for society,” he is engaged in research and development for the mattress company Airweave, which is supported by a number of athletes.   In April, 2016, he was made the board representative of the Institute of Sound Sleep Science. With a passion for the development of human resources in the field of science, he is also the head of the North American Alumni Association at an Osaka Kyoiku University-affiliated high school in Tennoji. This book will be his first to be published originally in Japanese.   The Stanford Center for Human Sleep Research, founded by William C. Dement in 1968, is considered the world’s leading sleep science research institute for having produced a number of great sleep researchers.