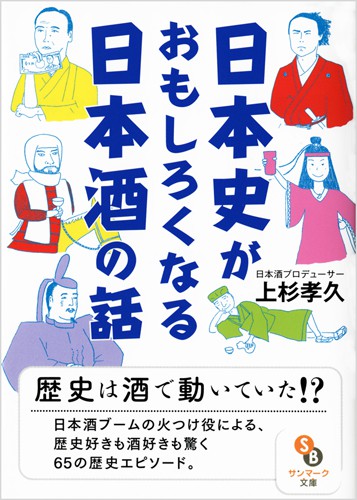 Here are 65 surprising stories for lovers of history and Japanese Sake.

When reading about the history of wine in Europe, we learn about how the Crusaders took grapevines with them on their expeditions to the Middle East. Wine and other kinds of alcohol, like whiskey from the U.K., beer from Germany, vodka from Russia, and bourbon from the United States, are deeply and directly linked to the history of their countries of origin. Naturally, the same goes for Japanese Sake.

By bringing Japanese Sake into the picture while taking another look at the well-known historical figures of Japan, finding out which local Sake they preferred, how they drank it, and what ancient Japanese liked to snack on while drinking, we get introduced to a very different side of Japanese history.

This book could spark just about anyone’s interest in both Japanese history and Sake.

– The oldest forms of Japanese Sake were produced in the mouth
– Disaster starts with delicious rice
– The duty of the Emperor is to “promote a culture of rice cultivation”
– What local government employees were paid in instead of money
– The bureaucratic elite passed on the job of brewing Sake to the Buddhist monks
– Samurai Era wisdom: Alcohol comes with a price
– How did the Shogun cure his hangover?
– The first and last time the Shogun and Emperor drank together
– Mirin was once considered high-grade alcohol
– The Izakaya — a new business opportunity caused by a fire outbreak

I first met the author, Mr. Uesugi, at his own Japanese Sake seminar. Seminars usually only involve listening to lectures, but at Mr. Uesugi’s Sake seminars you can eat snacks and drink alcohol while he shares his knowledge of the historical context and background related to the alcohol. Since professionals choose the alcohol, all of it is very delicious! In fact, I wasn’t fond of Sake until that day.
The fascinating stories of history and alcohol Mr. Uesugi has shared in his seminars have been compiled into this one publication. The many stories in this book will make even a non-drinker crave a nice cup of Sake. I sincerely hope everyone enjoys reading it.

Takahisa Uesugi is the managing director of the Jizake Japan Cooperative and a promoter of Japanese Sake. He was born in Tokyo Prefecture in 1952. After graduating from university, he worked in the publishing industry before inheriting a 60-year-old sweets shop called “Inoue”, located in the Nihonbashi area of Tokyo. He then proceeded to open a traditional restaurant as well as a bar in nearby Akasaka. He also opened the “BAR Raku” inside an international liquor shop within Tokyo’s Tobu Department Store, which became one of the most popular bars in Japan, and then the world, before a remodeling project in 2012 caused him to close his doors despite keeping sales figures high for 20 years.

Even with this minor setback, Mr. Uesugi has revolutionized the Japanese Sake industry by coming up with the idea and method for having Sake sampling stalls set up in department store basement floor open food markets and by creating a Sake market aimed at younger women.

He is focusing a large amount of his attention on a “semi-polished pure rice Sake harvest” utilizing cheap rice rather than higher-quality rice ideal for Sake brewing to produce delicious Sake, and is also working on a completely new concept of Japanese Sake development involving both Japanese Sake consumers and breweries. Moreover, to spread his knowledge of Sake even further, he runs liquor shops and restaurants and conducts over 100 seminars and lectures a year for both foreign and domestic Sake consumers.

Uesugi Takahisa is a 9th-generation descendant of Kenshin Uesugi and Harunori Uesugi.