The Household Chores Nobody Talks About 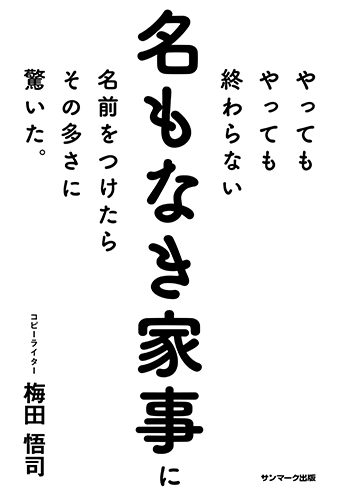 The entire day can slip away doing household chores. The amount seems endless!

Creator of popular company slogans such as “Somebody’s work makes the world go around” and “If you’re doing part-time work, do TOWNWORK,” and author of The Ability to Explain It in Words Is Your Weapon, Satoshi Umeda is a successful copywriter. He has now given names to those miscellaneous, unnamed household chores.

“I couldn’t have said it better myself!”

“I was nodding so much I thought my neck would break!”

“Never before have I wanted my husband to read a book this much!”

Sympathetic voices flooded onto his Twitter page when a post about “What I’ve noticed after taking paternity leave” received over 12,000,000 views. He recognized and named 70 miscellaneous household chores that people do throughout their day.
He also provided a useful chore duty signup list at the back, along with helpful professional tips at the end of each section.

This book will make household chores seem much less daunting.

Chores are no longer just a woman’s responsibility.

Honestly, I thought I was good at doing household chores until I worked on this book. I have experience living alone, and I am now married and in charge of laundry. But from Chapter One I realized I wasn’t doing things properly. This book is perfect for both the hard worker and those who had the wrong idea. There is also a chore duty signup list at the back that will make teamwork all the easier!

Satoshi Umeda was born in 1979. He graduated from Sofia University, Faculty of Science and Technology. He spent four and a half months on paternity leave in 2016 and 2017.  Posts he tweeted about his experience at home received a massive response of over 12,000,000 account views. Umeda has recently done copywriting for human resources company Recruit and coffee company Georgia. He is also the communications director for a Sunday morning TBS television drama. His book series has sold over 300,000 copies, which includes The Ability to Explain It in Words s Your Weapon (Nikkei Publishing). He is a visiting researcher at Yokohama City University and a part-time lecturer at Tama Art University.