The Frankfurt Book Fair is coming up again soon, October 8th to 12th. Every year when this season approaches, in contrast to being swamped with making arrangements for the Book Fair, we’re so excited at the prospect of meeting with people from publishers all over the world. From Sunmark Publishing, three staff members of the Rights Department will attend, and our booth will be in Hall 8.0/L20. If you’re interested in any of our titles or would like to make appointments to meet with any of us, please feel free to contact us.

Our address is rights@sunmark.co.jp (Rights Department).

The Life-Changing Magic of Tidying by Marie Kondo, with rights sold to more than 24 countries, has been written up in Publishers Weekly!

On August 22nd, an article about our recent powerful bestseller The Life-Changing Magic of Tidying by Marie Kondo appeared in Publishers Weekly with the headline “A ‘Neat’ Bestseller from Japan“. The book, which has sold 1.4 million copies in Japan, has also achieved great success in the field of translated books. Its popularity in Asian countries has been followed by both a German version and a UK version, which hit the bestseller lists in their countries, and now contracts have been signed in more than 24 countries. We expect the attention that this book is attracting will continue to grow.
If you’re interested in this series, please contact Mr. Ichiro Takeda, Rights Department (rights@sunmark.co.jp). 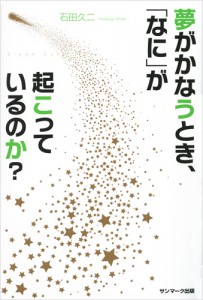 Experience a change in your perspective.
Includes a "secret notebook" that will help you work on turning your dreams into reality.

“Your life choices are based entirely on assumption.” This is what a millionaire businessman told me when I was a poor working man. Once I decided to test this theory, 90 percent of my desires became a reality and my annual income grew to 20,000,000 yen.

In a word, changing your outlook is all about enlightenment. If you open the door to enlightenment, the outlook that has shaped your life up until now will change drastically, and all of your wishes will come true. Furthermore, when wishes come true, enlightenment follows, completing a process that follows the laws of the universe.
The enlightenment process that this book explains is one that anybody can easily take part in and does not have anything to do with a cult, having special powers or being superhuman. Not only is it a simple process, this book comes with all of the tools you need, including a “secret notebook” attached to the first page. With this notebook in your possession, all you need is a pen to begin making your wishes come true. Put what you read in this book into practice, and allow your wishes to be granted.
Voices of readers:
– Our company’s profits more than doubled (man, 40’s, Shizuoka Prefecture).
– I gained 300,000 yen in steady income and was able to go to Hawaii with my boyfriend (woman, 30’s, Osaka).
– Just as I was giving up on looking for someone to marry, I met an amazing partner and got married right away (woman, 40’s, Kanagawa Prefecture).
– I was finally able to get a girlfriend for the first time in my life (man, 30’s, Hyogo Prefecture).
– I got a job at the company of my choice (woman, 30’s, Tokyo).

Going from unemployed to earning 20,000,000 yen a year
3 conditions that help give birth to creation
Do you want to quit living, or are there things you desire?
When you open your awareness and reset reality
The man who earned over 1,000,000 yen in four months
Now released to the public! The secrets to making your wishes come true in 100 days
What the universe is expecting from humans
The phenomenon behind the growth of happiness over time
Never before available to the public! A mysterious deposit into your bank account
Throw away the “look before you leap” concept

The first thing I noticed when I received the manuscript of this book was that it differed from the author’s blog and seminars; it was more serious but still had an alive, intimate quality to it that is typical of Q (Hisatsugu Ishida’s pseudonym).

If you read this book you will also feel your awareness and reality begin to change.

Hisatsugu Ishida is a mental coach, psychological therapist, lecturer, traveler, blogger, and the representative director of Answer Co. He was born in 1973 in Osaka, Japan, and currently lives in Fukuoka Prefecture. After graduating from university, he traveled the world and entered graduate school upon returning to Japan.

He was completely unemployed at age 27, but did grueling work with a company for four and a half years after that. A year before he quit working, he had a spiritual awakening, which influenced him to start a blog and to begin practicing waterfall meditation.

When he started his own business in 2005, he was completely penniless, felt incompetent, and had no connections, but after studying and practicing the laws of the universe, he soon became blessed with more income, more time, stronger family relationships, and more friends.

While staying up-to-date with the latest in the fields of psychology and psychotherapy, he practices various forms of traditional meditation like esoteric Buddhism and Zen meditation. Perhaps he could be considered a monk.

His coaching sessions about management, entrepreneurship, and starting a business are expensive but always have full attendance. Seats continued to fill as his psychological therapy treatment program designed for the general public was seeking volunteers. The goal of the seminar, which has been held all over Japan, is to improve mental health and has brought in around 10,000 participants. He has been acknowledged for giving lectures about detailed scientific theory that are emotionally and spiritually fulfilling to take part in.

It has already been over ten years since he started his blog called “Friends with the Universe” and has since then also practiced waterfall meditation over 1,000 times and counting.

His book, Friends with the Universe, published in 2009 by Hyogensha, reached the top of the Japanese book charts on Amazon and has received wide coverage in magazines and on TV and radio. 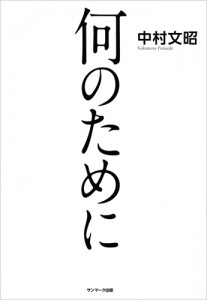 Don't wonder what to do, wonder "What For?"
Enrich your life by taking a good look at the root of your feelings.

When he wasn’t able to make any new acquaintances, he changed that by bumping into strangers on the bullet train to make conversation. When he was lacking in funds, he went around asking for loans using a list of top billionaires.

The author, Fumiaki Nakamura, is a man who celebrates everyone from the top businessman to the lady at the tobacco shop, not to mention his own customers, armed with his unaffected zeal and amiability. His lectures, which deal with finding your “true self” while using his golden rules of life as the basis, are a great success.

The Internet has given us access to an abundance of knowledge. Popular shops, clothes and expressions — in a world overflowing with material wealth and information, what you choose is in fact a representation of your own intentions and desires.

Why do you go to school? Why do you work? Why are you alive?

Fumiaki Nakamura expresses himself with serenity and patience.
His words are warm, familiar, and reminiscent of the old spirit of Japan.

Introduction Why can’t we erase human angst?
Chapter 1 Ask “What for?” to get yourself going
Chapter 2 Regain your true individuality
Chapter 3 The way of speaking of those people who succeed and those who fail
Chapter 4 Joyous things bring more joy
Japan’s role from now (as an Afterword)

I’ve had the great pleasure of working with many people in my lifetime, but Fumiaki Nakamura is an author who’s influenced me a great deal. I feel he’s been working up to this new release, having practiced his own four golden rules of life: “Answer in 0.2 Seconds,” “To Be Asked Is To Be Tested,” “Don’t Say You Can’t” and “Do What You Can, Now.”

To go along with the publication of this book, a documentary film of the same name is also being released. What For? deals with asking yourself the purpose of your actions before you act. Reading this book will help you understand how to live a life better suited to you by asking yourself “What for?” before making life choices relating to school, work, lifestyle, food, or even smaller, everyday choices.

As the editor of this book and the director of the documentary What For?, I sincerely hope that many people will read and enjoy this book.

Born in 1969 in Mie Prefecture, Japan, Fumiaki Nakamura left home and moved to Tokyo on his own after graduating from Kogakkan High School. After meeting a successful businessman who became his life coach, Fumiaki tried his hand at selling fruits and vegetables and working in restaurant management, helping him gain experience and become more knowledgeable in business.

Once he was able to support himself, he returned to Ise City in Mie Prefecture and prospered as the owner of a restaurant called Kurofune that also functioned as a bar that offered bridal services. He then grew in popularity after becoming a public speaker in the year 2000, giving a record 300 lectures in 2005.
Aside from touring the country, he has also organized projects like “Cultivate Japan” and “The Aspiring Teacher Project” in hopes of encouraging youth to get more involved in agriculture.
He is also the head of a private cram school called Fumiaki Nakamura’s School of Human Ties and the University of Bonding.