When it comes to sports, many Japanese are big fans of either baseball or football (“soccer”, as it’s called in America). Professional baseball leagues have quite a long history in Japan, and many of our families have a favorite team we support as a family tradition. Football is quite new compared to baseball, but due to the major success of the 2002 FIFA World Cup that was held in South Korea and Japan, football made a big impact in our society, and ever since then has been a major sport to watch and play.

Recently, we started talking about rugby as the 2019 Rugby World Cup is now being held in Japan from September 20th to November 2nd. Unlike baseball and football, it was quite a minor sport in our country, but there was a lot of publicity about rugby in TV programs, advertisements, dramas, and so on before the World Cup started. After Japan’s stunning victory over Ireland, who is one of the best teams in the world, and nobody really expected us to win, the excitement and heat surrounding rugby has been strong.

Next year, Japan will be hosting the 2020 Summer Olympics, and that has been a big topic for us for several years. Construction and preparation of the venues seem to be almost done. We’re lucky to be able to watch all those exciting sports during our lifetime.

Sunmark Publishing will participate in the Guadalajara International Book Fair from November 30th to December 8th. This will be our first time to attend a book fair in Latin America, and we’ll have a table to display our books. We’re looking forward to meeting publishers who are new to us. 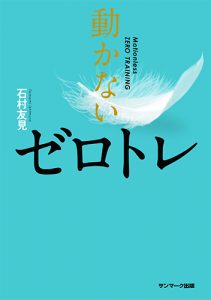 The long-awaited follow-up to the bestseller Zero Training, which sold 860,000 copies!
Resolve pain and stiffness by lying still for 30 seconds!

The best-selling book Zero Training dealt mainly with dieting, while this book focuses on general well-being. Zero Training also introduced effective methods that involve little movement, but this book takes that even further.

Being active is often regarded as good while being motionless is regarded as bad. However, incorrect or excessive movement while jogging, weight training, or performing yoga can harm the body and your health.
People aren’t exactly free to move about whenever and wherever they want in the first place. And there are days when we are too tired to even go outside. There are also times when knee or back pain makes it difficult to use the stairs. Indeed there are also those who are unable to move freely due to an illness or disability. This book introduces 8 different methods that allow you to easily perform “maintenance” on the body without moving at all.

After extensive research and implementation, Motionless Zero Training was developed to solve these 8 issues, allowing you to live with a comfortable body well into your 100s.
Just lying down for 30 seconds to one minute will straighten your neck, arms, back, and knees. It is the ultimate method perfect for days when your body is especially tired.
If you want a limber body that doesn’t hinder your lifestyle, to relieve years of stiffness and pain, to sleep soundly, or to improve your posture, you shouldn’t pass up this book. Give your body a new set of wings.

Chapter 0   What it means to be motionless

From the editor "Seiichi"

I’ve never seen a health book that tells you not to move. Lying down in one of the poses introduced in the book fixes slouched shoulders, a forward-bent neck, and a curled waist. Your body will feel better than ever before, and you’ll be surprised by how long your neck, arms, and legs actually should be! The methods in this book are perfect for when you’re feeling tired or lazy. They are a must-try.

Creator of Zero Training and yoga trainer, Tomomi Ishimura is the representative of the Body Tone New York yoga studio. She played the role of Queen Sarabi in the Shiki Theatrical Company production of The Lion King. She moved to New York on her own after that. At age 35, she was selected among 2,000 people to play the role of Miss Chinatown in the Broadway production of Miss Saigon. She went on to establish the Body Tone New York yoga studio and set up a New York yoga study-abroad program, where students from Japan can acquire qualifications (Yoga Alliance). Her Zero Training, a method that promotes weight loss and rejuvenation by returning parts of the body to their natural “zero” position, has attracted the attention of Hollywood actresses, top models, and athletes. She is also creating a buzz in New York. Her bestselling first book, Zero Training — released in Japan by Sunmark Publishing in May 2018 — sold 860,000 copies, earning her a large amount of attention in local media.

Never Mind, If You Cannot Do It 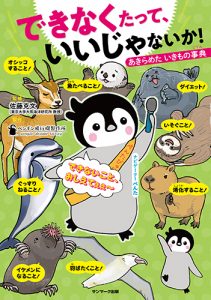 The Insta-famous penguin named Penta interviews animals about their strengths and weaknesses!

【A funny, but encouraging, reversed theory of evolution!】
All living things have their strengths and weaknesses.

The protagonist is a small penguin named Penta. Penta had wished to fly high in the sky, but penguins aren’t that kind of bird…. This made Penta sad, but he began to think that perhaps penguins gave up on flying in order to become strong swimmers!

Penta then asked other animals what abilities they have that make up for their weaknesses. This book explains the “mysterious evolutionary process” of 55 living things.

【Full-color illustrations on every page!】

Penta, a little penguin who is a big star on Instagram, asked 55 living things about their strengths and weaknesses!

【Learn to love science naturally!】
University of Tokyo Professor Katsufumi Sato clearly explains the secrets of the animal kingdom. This book has been praised for helping children to naturally improve their strength in science and reading.

【Great for a research project!】

Refer to your favorite parts of the book to put together a great research project.

Penta is a cute little penguin who’s become a big star on Instagram. Penta helps clearly explain the secrets of the animal kingdom.

Capybaras gave up on digesting food!?

Salmon gave up on having a heartbeat!?

Tapirs gave up on urinating politely!?

Albatrosses gave up on flapping their wings!?

Live sharksuckers gave up on swimming by themselves!?

Ariel gazelles gave up on urinating!?

Green sea turtles gave up on stopping their tears!?

Okapis gave up on going Number 2!?

Streaked shearwaters gave up on refraining from committing adultery!?

Penta’s new book about animals has finally arrived! In this book, Penta asks the world’s animals what they are bad at but also what they are good at. Readers will enjoy interesting facts about the evolution of animals and Penta’s hilarious illustrations. This book has educational value for both children and adults!

Katsufumi Sato was born in Miyagi Prefecture, Japan, in 1967. He is an Atmosphere and Ocean Research Institute professor at the University of Tokyo. He received a doctorate in agriculture from Kyoto University in 1995. He was a Japan Society for the Promotion of Science research fellow, a National Institute of Polar Research assistant, and an assistant professor for the Atmosphere and Ocean Research Institute before taking his current position. His fields of study include ethology, animal physiology, and ecology. He is active in the field of bio-logging, which involves placing data recording devices on free-range animals to closely track their movement, behavior, and physiology.