Recently, tennis has been becoming more popular in Japan since Kei Nishikori, one of the top Japanese tennis players, has had great results at big world tournaments. The sport is also getting attention at Sunmark Publishing because some staff members have formed an in-house Tennis Club team and they meet regularly. Early every summer, there is a tournament held by the publishers’ health insurance union, and a doubles team from Sunmark took part in it this June. When it was over, the team had come in third place in the second division, so now we’re hoping for their success as they face a challenge in the first division next year.

The Life-Changing, Pulsing Magic of Cleaning Up is receiving offers one after another from many countries! 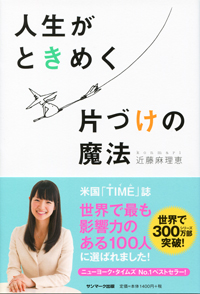 The worldwide bestseller The Life-Changing, Pulsing Magic of Cleaning Up by Marie Kondo is having great sales in every country where it’s been released, including China, Korea, Taiwan, Germany, and the U.K. Furthermore, contracts from the U.S., Italy, Thailand, and Brazil have already been signed (the U.S. edition will be released Oct. 14, 2014 by Ten Speed Press). The popularity of this book keeps on growing, and offers from many other countries are coming together now. Be sure not to miss the chance to check on this book, which can solve the problem of tidying up that’s common all over the world.

Make Your Wife the Head of the Company Right Away

A trick to wealth creation that even an office worker can learn. 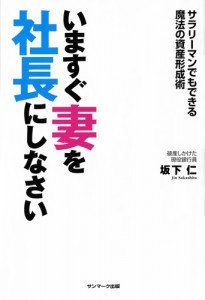 What's this idea of a "private company" that has brought a fortune of several hundreds of millions of yen to married couples on the verge of bankruptcy?

Office workers are set up so that they can’t easily become wealthy.
This should become clear if you just take a look at the situation around you.
Even though there may be people who have worked hard to receive a promotion and raise their salary, it seems there isn’t a single person who is able to work a little while living a life of leisure as a result of that hard work.
What can an office worker do, then, in order to prosper?
There is only one way, and that is to create a “private company” as a couple, and put your wife in charge.
By doing this, you can soon become a wealthy married couple with money continuously flowing in.
Those who believe that monetary wealth is limited only to a handful of lucky people should read this book, and then that belief will surely change.

A discovery that led our family to wealth in five years
Nothing is as wasteful of your wife’s talents as a part-time job.
Throw away the concept of becoming rich on your own
An express ticket to wealth that anyone can create in three hours
The world’s best no-risk, high-return way to create wealth
An extreme way to cut home and car maintenance costs
A trick for dual-income couples and bachelors!

Throughout the editing process, I began to think very hard about putting into practice some of the points mentioned in this book.
Actually, I wish I had had this knowledge much earlier in life.
Hearing something like “I gained several hundreds of millions of yen in just five years” sounds very suspicious, but that’s simply not the case.
You will find this book quite logical as it explains wealth creation in terms of the essence of money and the legislative system.
The author also happens to be a banker, so with that said, it is expected that as soon as you put down this book you, too, will think, “All right, let’s try it!”

Jin Sakashita works in a management position for Mitsubishi Bank, one of the three largest Japanese banks. As someone who is good with money, he’s worked as a consultant offering financial guidance, loans, and customer advice throughout his 20s, seeing several cases of success and bankruptcy right before his own eyes. However, entrusting too much of his money to the stock market caused him to fall into a debt so enormous that he had to pay his home loan with his parents’ annual pension and get by with only the clothes on his back that he purchased at a flea market for 300 yen. Then, on the verge of bankruptcy and realizing “the essence of money,” he was able to repay all of his debt within five years. At this time, he was receiving tens of thousands of yen in cash flow, giving him so much economic freedom he could have bought a precious three million yen diamond on impulse if he had wanted to. While working at the bank, he also works for a volunteer company striving to enlighten and guide office workers to find wealth and prosperity.