Unbelievable World Principles the Sadistic Universe Didn’t Teach Me When I Was 20,000,000 Yen in Debt 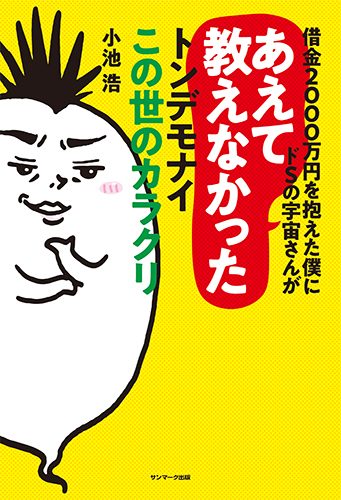 The popular series with 200,000 books sold!
The conclusion of the hit “wish-fulfilling book” has finally arrived.

Feeling helpless in your efforts to change your life? Turn things around with lessons from the universe and the final teachings of the “talking scroll”!

Everything was going well for 51-year-old Hiroshi Koike. He paid off a 20,000,000-yen debt in nine years, work was going well, and he had acquired the foreign car, family, and detached house that his family had always wanted. Although everything was going his way, lately he hadn’t been hearing from “Mr. Universe,” the sadistic provider of life-changing advice.

Could this mean his life was coming to an end? While packing up to move, Koike discovered an old scroll with the words “Do not reveal this to humans” written on it. It was the “Re-education bible,” used to help turn around the lives of unhappy humans.

Those who revel in negative energy, hold themselves back, and live in poverty will see their lives turn around.

The third and final installment of this series tackles the mechanisms behind the mind, the spirit, and wish fulfillment. Even skeptical readers are in for a real surprise.

Knowing these unbelievable principles of the world will turn your life around.

I knew it all along. There were extremely important world principles written on the secret scroll that Mr. Universe was hiding.

One: Teach about speaking habits

Two: Teach how to escape unhappiness

Three: Teach how to master the habits of mind

Four: Teach what is holding people back

Five: Teach that wealth comes from paying in advance

Seven: Teach that you can’t change others

Eight: Teach how to thoroughly choose and enjoy life

○Reason why speaking habits can change your life

○Reverse negative speaking habits with a single piece of paper

○However dispirited you are, there is a road to happiness

○If you’re truly ready to be happy, you have nothing to fear

○The “wiring of the soul” can keep dreams from coming true

○How the words “thank you” renew your subconscious

○Feeling as though happiness escapes you is a habit of mind

○What happens when you dive deeply into world news
○Three steps Koike took in radically changing his mindset that helped him escape debt
○Are you saying a happy “thank you” at the checkout?
○Saying “There are no good men out there” sends a negative message to the universe
○Why 90% of wishes to reconcile with past lovers don’t come true
○The one thing husbands should do when their wives are nagging

From the editor "HANA"

The final installment of the “Mr. Universe” series has finally arrived. The protagonist, Koike, once miserable and 20,000,000 yen in debt, turned his life around by changing his speaking habits and actions. The 200,000 responses we received relating to Koike’s transformation reduced me to tears. But the story wasn’t over yet! This time, we learn the reason the universe called upon Koike, and the secrets to living a peaceful live are revealed. This book explains why our mind and soul tend to be cluttered, and it dives deeper into topics mentioned in the previous book. I hate to say it, but this might just be the end of the tale of Mr. Universe and Koike. I hope you laugh to the very end.

Hiroshi Koike is a psychologist and representative director at Indigod Sendai. Fifteen years ago, he fell into 20,000,000 yen of debt — 6,000,000 yen of that from illegal loans — while managing a clothing store. He recalls making a spiritual connection with the universe just when he thought filing for bankruptcy was the only step left. His life changed suddenly after he began using the power of words to purify his subconscious and communicating with the universe in a more positive way. The cosmic messenger he corresponded with, whom Mr. Koike referred to as “Sadistic Mr. Universe,” sent clear and helpful hints that helped him improve his life. He left the clothing store to start a bracelet shop, which attracted nationwide attention after being featured on local television. His debt was paid off in 9 years, and profits continued flowing in. He now lives a fulfilling life with his wife and two daughters. His previous book, Lessons From a Sadistic Universe When I Was 20,000,000 Yen in Debt, in which he speaks to his bracelet shop customers about the order of the universe and how to make their dreams come true, became a bestseller. The following comic spin-off version was also well received. The popular series has sold more than 200,000 copies.