Talking to the Devil - The Majority Rule 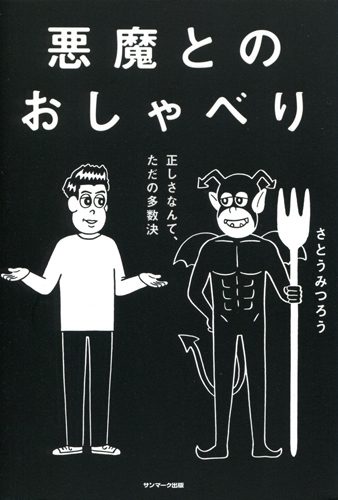 More impactful than the best-selling book Talking to the God.
An entertaining novel that will change your values.

It’s been three years since Talking to the God was released, selling 200,000 copies. Tired of conventional teachings and ethical rules for success, Mitsuro comes across a chatty devil who asks:

Have good deeds ever led anybody to happiness? The morals that school and your parents have taught you are all wrong. My evil army knows the real way to fulfill all of your desires.

Mitsuro, the impressionable young man was quickly swayed and fell into the hands of the wicked, beginning to doubt all that is “right.” You must know, however, that the ship they rode together wasn’t headed for hell, it was headed for heaven.

This novel will shake your value system to the core, and the devil’s influence will change your life forever.

※ Warning. This story should be handled with care, like an addictive drug.

Those who want to continue living their lives in peace shouldn’t pick it up.

All of your troubles are caused by correctness

Save yourself from anger by throwing away expectations

Nothing’s ever made you more unhappy than happiness itself

The world is a real matrix

Who is really in control of you?

There are film clips that show every moment of your life

Before you were somebody, you were nobody

Possessions are all an illusion

A game that takes life from one extreme to the next

After that, all days become good days

How do we know whether the world exists or not?

You and the world are exactly the same age

This world is made up of misunderstandings

A demon’s method for misunderstanding

Nobody has the power to improve their luck

A request from the top god of the universe

If there’s an afterlife, then why not a parallel universe?

Why do we experience déjà vu and precognitive dreams?

Everything is, except for what isn’t

It took three years, but after much trial and error, we were able to make a powerful sequel to Talking to the God. The next important conversation you have will be with a demon. If you think that speaking to a demon brings you bad luck, you are very wrong! If you think about it, all people you would refer to as demons, like evil political leaders and crime bosses, always seem to be having fun.

That’s right. Demons are free of troubles because they lack common sense. An editor on our staff said, “I became so immersed in this book that I forgot about the proofreading deadline.” I took it as a first-class praise!

After graduating from a university in Sapporo, Japan, Mitsuro Sato worked with a listed energy company for 10 years. He began to realize that the only way society can change is by people changing their awareness. This led him to start a blog called Waraeru Supirichuaru (funny spirituality) in 2011. His novel outlook earned him a top spot on various ranking lists, with his blog reaching more than 2,000,000 hits in a month. In 2014, influenced by the support of his readers and peers, he decided to retire from his day job and start a talk show in which he speaks and also does piano performances. His “talk show and piano show” is currently touring nationwide. That same year, he also published his first book, Talking to the God (Wani Books), which became a bestseller, selling over 200,000 copies. He is also the frontman of rock band Son of a Rock, whose major label debut Graviton reached number 24 on the Oricon charts. His main work as an author includes Instructions for Becoming Rich (Shufu-To-Seikatsusha) and The Name is Bashar (VOICE).