Everyone Says It: We'll Meet Again 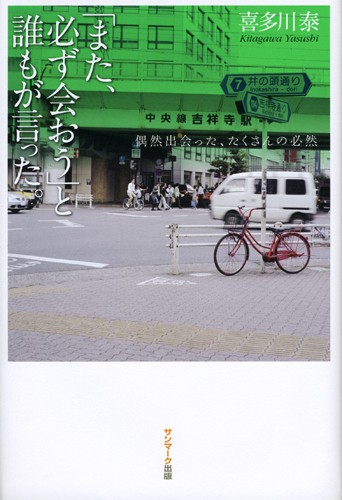 A boy's relationship with ordinary grownups leads to an unforgettable experience.

The main character is 17-year-old Kazuya Akizuki, a high school student who lives in Kumamoto Prefecture. He goes to Disneyland by himself after telling a small lie while under pressure. Following a number of misfortunes, he misses the last flight back. With only 3,400 yen, he doesn’t know how he can get back to Kumamoto.

In his bewildered state, a woman working at a souvenir shop in the airport calls out to him, “Hey! Kid!” During a time when he has just started thinking about life, the grownups he meets give him advice which, although conventional, is as valuable as sparkling gems. Famous bestselling author Yasushi Kitagawa has written a moving story about events and situations that anyone can relate to.

“This story is about a boy who goes on a journey on his own. As he meets and interacts with so-called ordinary people leading their everyday lives, he gets the chance to reexamine his own life. He also discovers the power to live. Actually, it can be the same in your life, too.”

“Things don’t always go according to plan. We meet lovely people and then say goodbye to them. This is something we come to realize as the process repeats itself over and over again.”

“I hope this book encourages people to actively pursue relationships with others and to make better use of their inborn power to live.
Nothing would make me happier.”

This is a book about a boy’s encounters on his journey into adulthood. The instant I got the manuscript by strange chance, I instinctively thought, “This was destined to happen!” That’s because the details of the story are uncannily identical to the daily reality that I myself was dealing with. There’s no hero in the story, and there are no incidents that would take you aback. The grownups who get involved with the main character are the kind of people you find anywhere. Even so, the things that these ordinary people say seem unusual because they ring true.

This is likely a taste of the author Yasushi Kitagawa’s own feelings. In any case, I would like adults to read the book first. After you are finished, give it to a junior high school or high school student that you know. This is the ardent plea of someone who has read and been touched by this book.

Yasushi Kitagawa was born in Tokyo in 1970. He was raised in Saijo, a town in Ehime Prefecture. He graduated from the University of Tokyo and established a preparatory school called Somei in 1998. He continues to pursue an entirely original preparatory school method. In 2005, he began his writing career. His own particular way of seeing the world is admired by many people . His works include A Wise Man’s Writings; Because I Met You; Letter Writers, Letter Writer 2; Going to Tokyo, (Discover 21), The Man Who Was Possessed with Fortune (Sogo Horei Publishing), The Perfect Conditions to Set Your Heart at Ease (Gentosha)