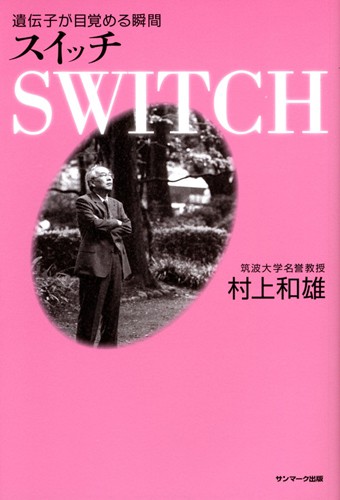 It's not about talent or destiny-it's about switching on your genes!
A world-class authority on biotechnology talks about how to make "miracles" happen.

The essence of the documentary film SWITCH, which has moved audiences all over the country, has been captured in this book!
Our genes have a switch, although there are many people who aren’t aware of this fact. We all imagine genes to be immutable forms that are passed down to us from our parents, but they are dynamic and can change when they’re influenced.
University of Tsukuba Professor Emeritus Kazuo Murakami, whose noteworthy achievements in biotechnology are acknowledged around the world, provides scientific explanations using real-life examples. He talks about Junko and Momoko Suzuki, both of whom survived a major accident, and the experiences of Katsuko Yamamoto, a special-needs school teacher. He then touches on the aftermath of the Great East Japan Earthquake, life, and the soul.
-Is your genetic switch on?

Genes change according to whether the switch is on or off.
The state of your mind can change the way your genes operate.
New environments create new thought patterns
Children with special needs possess an amazing ability
A miracle: The sick support the healthy
Prayer heals disease and makes food delicious
Laughter is the best medicine for adding verve to your life
The tougher the journey, the greater the need to lighten up
The Great East Japan disaster awakened Japanese virtue
The soul has an eternal, undying life

It’s likely that many people think they don’t stand a chance because of the genes they inherited from their parents. Dr. Murakami demonstrates with scientific explanations that this belief is wrong. Actually, there are many people who bring their full capabilities to fruition through their own mental attitudes or by varying the environment they are in.
Using real-life examples as a basis, he talks about how people with various genetic disorders actually keep the human race from becoming extinct. What appears to be negative turns out to be positive, and positive things are founded on negative ones.
This book will change the way you perceive the world. So, will you read the book first or watch the documentary film first?

Kazuo Murakami is Professor Emeritus at the University of Tsukuba. Born in 1936, he completed his doctorate in Agricultural Chemistry at the Kyoto University Graduate School of Agriculture in 1963 and went on to become a researcher at the Oregon Health and Science University in the same year. He was appointed Professor of Applied Biochemistry in 1978, and he began research in genetics. In 1983, he successfully decoded the enzyme renin, a hidden factor behind high blood pressure, gaining worldwide recognition for his achievement.
He received the Japan Academy Prize in 1996, and in 2011 he was awarded the Order of the Sacred Treasure.
He has written numerous books, including The Divine Code of Life, The Divine Code of Life (2), Something Great, God Prefers Fools (all published by Sunmark), The Ridiculous Power of Life (Kodansha), Yes! Everything Will Work Out! (Kairyusha), Living with Passion, Laws of the Soul and Genes that Make Life Worthwhile (both published by Chichi) and A Million Prayers for a Miracle (Softbank Creative). The documentary film SWITCH revolves around his research in genetics and follows the lives of people who have taken hold of their destiny by switching on their genes.
Non-profit screenings of the documentary are receiving an immense response.