My Six Days With the Secret Society “Ladybird” 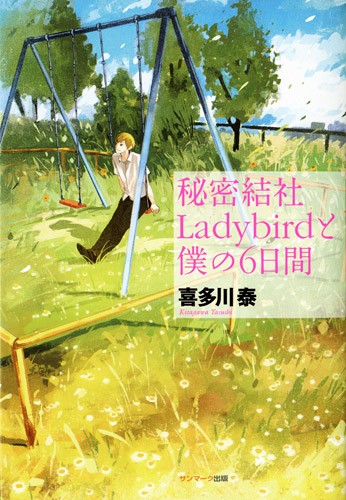 A lazy 18-year-old high school student meets a group of inspirational adults who live in the “now”.
This is the long-awaited full-length novel by the author whose book sales have surpassed 700,000 copies.

The protagonist, Souta, is a high school senior who swims faster than the other third-year students and is envied by his peers. However, fear of losing to his rivals causes him to quit swimming and join the school’s calligraphy club, and he begins to fall behind in his studies. One day, he passes out on the side of the road because of heatstroke. When he wakes up, he finds himself in the bar from a movie called Ladybird, which his father had watched countless times and Souta had seen once with his father. Those he sees standing around him are the same characters from the movie. The lively lifestyle of these characters changes Souta’s life.

“I found life boring, but after meeting them that day, I decided to become an adult who keeps his promises.”

This is a brand-new story with vivid characters by a master of youth novels who always paints an accurate picture of life as a teenager. Reading this book will make you reflect on your own life.

Once I was finally able to get my hands on the first draft of the novel, I was initially shocked. A secret society? “Ladybird”? They act like children! What’s with this setting? What sort of stories is Yasushi Kitagawa trying to write? But as I kept reading, I realized that the concept of the “secret society” is interchangeable with that of the “office,” the “family” and “friends.” Also, the book leaves us refreshed, with an earnest feeling about the coming years of our lives and the importance of living through them to the best of our ability. Please enjoy Yasushi Kitagawa’s new frontier.

Yasushi Kitagawa was born in Tokyo in 1970 and raised in Saijo City in Ehime Prefecture. He graduated from Tokyo Gakugei University and in 1998 he founded a tutoring school in Yokohama called so-mei. It became well known in the area for its fresh approach, stressing the importance of personal growth. He began his career as an author in 2005 with a unusual worldview that is admired by many people. His works include Everyone Says It: We’ll Meet Again (made into a movie in 2013), Oibesan and the Unusual Mother and Child, One World, A Boy Cursed With Good Fortune (all Sunmark), The Miracle to Enrich Your Life, The Goddess of Victory, The Letter Shop, The Letter Shop: Diligent Study Edition, A Tokyo Story, Starting Line, Life Traveler, Time Capsule Inc. (all Discover 21), The Key to the Library (Gendai Shorin), Ko-ha-ru-bi-yo-ri (Gentosha), and Mother’s Croquettes (Daiwashobo). Many of his works have been translated into Chinese, Korean, Taiwanese, and Vietnamese.