The Challenge of Dassai

From the Mountains to the World 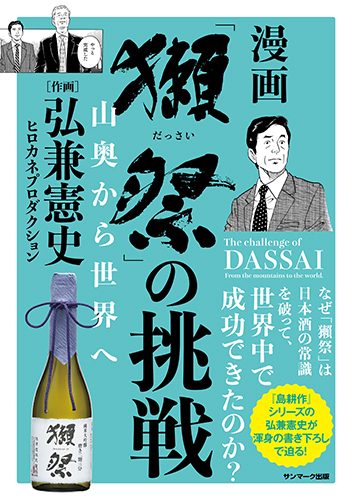 How Dassai broke the mold to achieve international success in the world of sake. Kenshi Hirokane, creator of the popular Kosaku Shima manga series, details how a sake brewery took on the world from the mountains of Yamaguchi.

One of the last remaining sake breweries in the area, and facing a nationwide shochu boom, sales remained low. Price reductions and novelty campaigns weren’t enough to turn business around.

Sakurai decided to try his hand at brewing junmai daiginjo, the highest grade of sake. Ignoring opposition, he experimented with a variety of recipes, only to keep falling short of creating just what he had in mind.

Finally, nearly six years of devotion gave birth to his very own junmai daiginjo variety, which he named Dassai. In 1992, Sakurai pushed the limits of rice polishing, creating Dassai 23, which boasts a polishing rate of 23%.

Initially, the failures of Sakurai’s new business venture forced the master brewer and other staff to leave Asahi Shuzo. Determined to keep moving forward, he and the remaining employees turned their focus to four-season brewing.  Furthermore, he cut ties with wholesalers and began dealing directly with liquor shops.

Sakurai had his eyes set on Tokyo, and then the rest of the world.

The birth of Dassai

Taking on the world

I first met Asahi Shuzo head, Hiroshi Sakurai, in the spring of 2019. We had lunch while he spoke in-depth about Dassai – how it all began, and how it took the world by storm. A meeting with manga artist, Kenshi Hirokane, gave birth to a surreal collaboration with this book arriving nearly a year later. It details the exceptional success story of a sake brand, but the message is applicable to anyone striving for greatness in their own craft.

Kenshi Hirokane was born in Iwakuni, Yamaguchi, Japan. After working at Matsushita Electric Industrial (now Panasonic), in 1974 he debuted as a manga artist in the Big Comic magazine with a strip called Kazekaoru. In addition to his best-known series, Kosaku Shima, Hirokane is also responsible for the comics Human Crossing and Like Shooting Stars in the Twilight (both published by Shogakukan), among others. He is known for tackling social issues in his work.  In 2018 he released Enjoying Solitude, an essay published by PHP Interface.