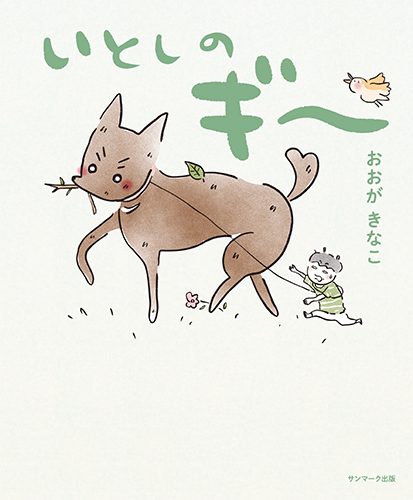 A moving story about winning the love of a dog.

Gi is a timid former stray whose love and trust her owner struggles to win.

Gi is a former stray from the mountains of Kumamoto Prefecture. Her large body was curled up into a tiny ball in a corner when Oga first saw her. Oga was told, “She was a stray and it could take years for her to warm up to you, but she is extremely cute.” That was all Oga needed to hear. Gi became their second dog.

Living in the mountains made Gi very muscular, but she was extremely timid. She was scared of loud voices, cars, the indoors, and people. Oga and Gi have been through a lot together since they first met.

This manga details the day-to-day occurrences as Gi gradually warmed up to her new life.

My image of dogs is wagging tails and running up to people in excitement. But not Gi. Curled up in a small corner of a room, Gi was terrified of humans. You can see in her face that she is slowly growing accustomed to her new life.  I must confess, I fell madly in love with Gi after reading this manga. My work computer wallpaper is set to a picture of Gi! She is so cute! You won’t be able to help yourself!

Kinako Oga is a manga artist and illustrator born in 1984. She illustrates mainly for social media and websites. Her style tackles the human condition. Her motto is, “Don’t illustrate a lie.” She is currently living with Gi and the latest addition to her family, a Shih Tzu named Maru. She is also the author of Conversations with a Coffee Shop Manager.